Today, an all-star roster of electronic music talent, professional athletes and gamers are participating in “Friendsgiving In Verdansk,” a Call of Duty battle royale extravaganza streaming live beginning at 12pm PT. Fans can tune in to Nerd Street Gamers on Twitch as Afrojack, Excision, Cheat Codes, Nicky Romero, Ookay, Snails, and more are set to play with and against each other in a 40-team Thanksgiving Day tournament. The all-star squad, who will each also be streaming on their personal Twitch channels, will be playing for a good cause, with the winning team receiving a cash prize that will be donated back to the charity of their choice. Joining forces as team captains in the star-studded virtual battlegrounds, the roster of talented musicians and celebrity players includes:

With each team captain having the ability to build their squad in any way they’d like, every team brings a unique combination of fellow artists, friends, professional gamers, and even a few lucky fans who have been selected to play. Courtesy of HyperX, every team captain will be provided with a full streaming set-up so viewers can tune in worldwide and watch the five-game tournament live, with each squad competing to earn the title of first-ever “Friendsgiving In Verdansk” champions. The gaming live stream is the latest in a series of creative ways these artists and celebrities are striving to stay connected to their fans during this “new normal” virtual-era.

Tune in at 12pm PT Thursday, November 26 to catch the action live via Nerd Street Gamers on Twitch. 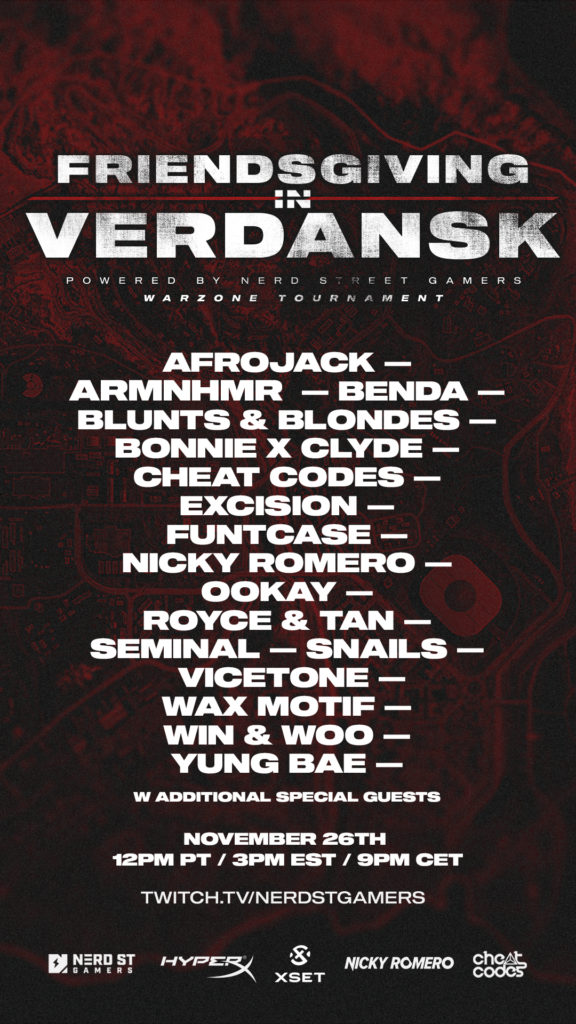 GRiZ Announces Return Of ‘Another World’ in October at 1STBANK Center

One Dead, 20+ Injured After Main Stage Collapses At Festival Due To High Winds

After 5 years, Wuki’s “We Like To Wuki” edit sees official release with Vengaboys & Yo Majesty