Nile Rodgers and the height of Chic

In late 1976, a guitarist named Nile Rodgers and a bass player named Bernard Edwards bribed an elevator operator $10 to keep quiet about an after-hours session. Their friend and DJ Robert Drake was working as a maintenance man at Sound Ideas Studios. Along with the rhythm section of their former group The Big Apple Band and by roping in friends such as a pre-fame Luther Vandross, they recorded a song called ‘Everybody Dance’. Rodgers was convinced the idea of a ‘breakdown’, that he’d seen done to perfection at R&B live shows — stripping back the musical parts to leave just the basic elements of the groove — would translate to a recording. A few weeks later, Drake called Nile, cryptically demanding he come to the Night Owl, a prominent nightclub where Drake was DJing, claiming it was an emergency. Rodgers made his way to the club and waded through the predominantly wealthy, black and well-dressed crowd.
Spotting Nile through the cigarette smoke haze, Drake dropped the needle on a lacquer he’d cut of ‘Everybody Dance’ straight from the studio. Immediately the crowd wailed in approval, as Bernard Edwards’s syncopated bassline kicked in, the dancefloor filling just in time to loudly sing the choral refrain back at the booth. As the song finished, Drake started it again on a second lacquer, going through seven plays of the demo, over an hour of the same song, with the dancefloor staying in full frenzy for the whole 60 minutes.
“I realised the power of the groove and the power of a DJ to talk to the audience,” Rodgers would later tell an RBMA lecture room in 2011. “All of a sudden, we really believed in ourselves.” 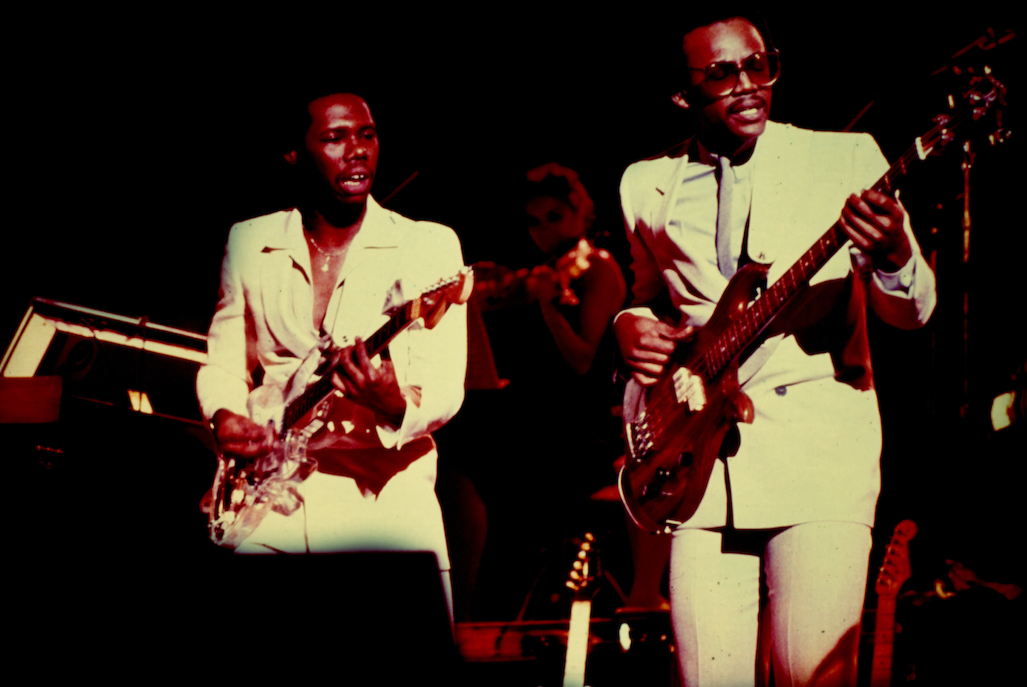 SOPHIATO-FUNK
Chic’s story begins in the club. Inspired by Roxy Music and partially influenced by a stage fright that would almost cost him his life, Rodgers created Chic as an anonymous enigma, where there was no front man and “music was the star”. Their ‘breakdown’ sound attracted the attention of many, including Grace Jones, who invited them to her New Year’s Eve show at the iconic Studio 54 at the end of 1977. Turned away at the door, they returned to Robert Drake’s apartment and went on to write a protest song that became the biggest-selling record in Warner Bros’ history: ‘Le Freak’.
Chic’s self-proclaimed “sophisto-funk” was based around taking dense and intricate chords not typically heard in pop music and masking their complexity behind an infectious and distinguished groove. ‘Everybody Dance’ and ‘Le Freak’ were quickly followed by ‘I Want Your Love’, ‘My Forbidden Lover’ and the track that went on to influence the beginning of hip- hop, ‘Good Times’. At the core of their creative relationship was Rodgers’ and Edwards’ “golden rule” production technique DHM: Deep Hidden Meaning. Every song had to have an underlying significance beyond the initial lyrics and perception, “understanding the song’s DNA and seeing it from many angles”.
The formula worked, and Chic were flying high until disco was stopped in its tracks almost overnight by a radio DJ named Steve Dahl. Fired from his station when the music policy switched from rock to disco, he started the ‘Disco Sucks’ movement, encouraging a mostly white audience to bring their disco records to a Chicago baseball stadium where they would be blown up at half- time. A riot ensued, it made national press and disco became a dirty word, with record executives turning their back on the sound that had made them millions. The movement was, and still is, viewed by many as a protest against black, gay and Latino dominance in disco, while others argue it pushed the movement back underground, forming the roots for what eventually became house music. For Chic, who never saw themselves as exclusively part of the disco phenomenon, it was a challenging time.