Orbital are back. Hooray! One of the most important electronic bands of the last 30 years have split a couple of times over the years, but the Hartnoll brothers have put their differences aside to reunite once again. And now they’re rocking the Racecourse in Brighton on a windy summer evening, running through some of their amazing back-cat such as the sunshine positivity of the Opus III-sampling ‘Halcyon’, the achingly soulful ‘Belfast’ and their breakthrough track nearly three decades ago, ‘Chime’ — interspersed with bits from their new album, ‘Monsters Exist’.
It’s great to have them back in the saddle again — trademark head-mounted torches, thought-provoking visuals and all. Your hack has seen Orbital play live countless times over the years, but has never had privileged backstage access that lets you see what they’re doing from behind. It’s quite an education — a bit akin to seeing behind the Wizard Of Oz’s curtain. Paul, the younger brother, is super-active on the controls, while Phil messes with FX and sample triggers. While some electronic acts don’t physically appear to be doing very much when they play live, Orbital are definitely working those machines. Their hometown gig is a triumph. 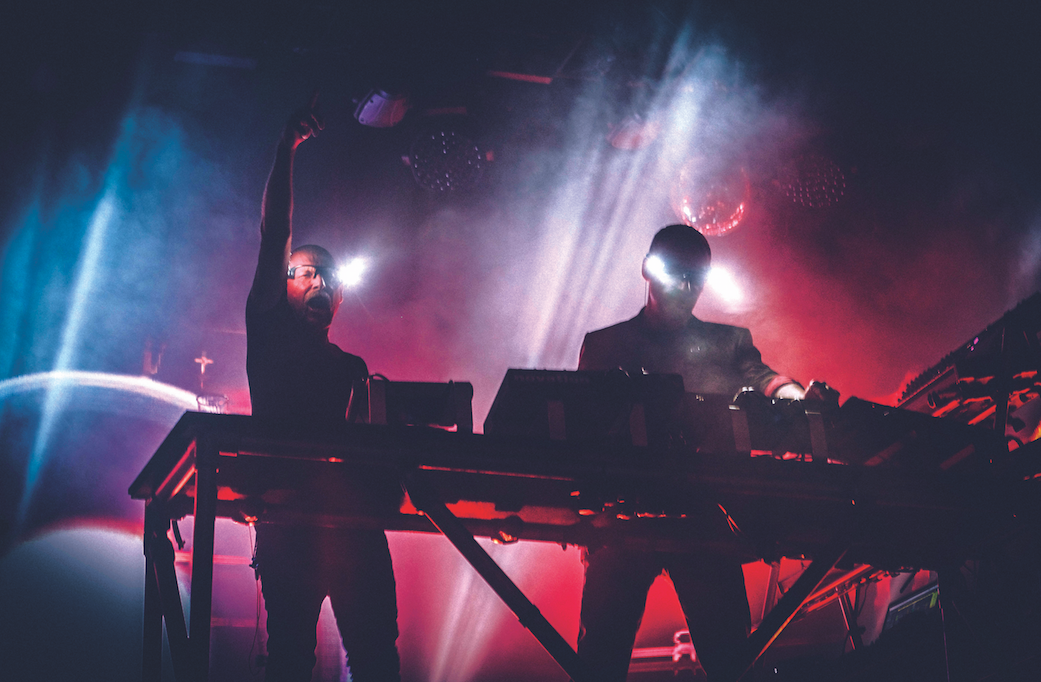 Meeting up with the brothers a few days later in their fave Brighton caff — Presuming Ed’s on London Road — DJ Mag immediately asks them what exactly it is that they do live…
“OK, so we’ve got everything broken down into millions of pieces on Ableton,” Paul begins. “You construct an album — or a career of songs or whatever — and then break it down into all its little pieces, get all granular with it. Little loops and pieces. Then I have them all ready to go on Ableton, which by the time we’re ready to go is about 500 tracks wide by about 500 clips down. There’s no arrangement, no pre-planned… how do we know what they all are? You name them [laughs].”
As Phil goes off to get some water, Paul continues explaining why he doesn’t like looking at a computer when he plays live. “My old way of playing live was to do exactly the same thing but on little hardware sequencers, which is what we started off with,” he says. “Eight buttons, and you could change patterns. And essentially I’ve rebuilt them on iPads — two iPads now, one for each hand, that are identical, so that if one goes down you’ve got the other one.
“So, I create a series of buttons and map those to buttons on the computer,” he continues. “And there’s a page for each song. Some of them are busier than others — like ‘Chime’ isn’t that busy at all, cos it’s old skool — whereas some of the new ones are quite complicated. So you build one for each song, but then you can flip to the next song and start bringing in bits from the next song as you take bits out of the other song. It’s not like DJing, but it kinda is in a way. Getting back to that granular word, you’re making up the arrangements — nothing would change if you don’t do something.
“You might think ‘I need the chorus now’, so you punch those three in, take those three out. I have the odd button like ‘all drums out’, but mostly I’ll bring them in and bring them out. Then on top of that you’ve got three little mixers which have the volume and mutes, and the method changes as you go through the set, depending on the age of the track. Then on top of that you’ve got all this Midi and sampling information pouring out into seven analogue synths — some old, some new — and then you’re manipulating the sounds as well in a good old-fashioned Tangerine Dream or acid house way, depending on the track. On the little mixers you’ve got three channels of FX as well — and that’s essentially it. So you’re doing a live mix, a live arrangement and a live synth performance.”
Phew! Paul is a good explainer who makes it sound quite easy, but it’s a way of properly doing the electronic thing live that Orbital have developed over nearly three decades. Paul says that they always have a setlist worked out before the gig so the guys doing the video — who are kinda jamming too — know vaguely what’s coming next. “So you have a setlist but you just don’t know how you’re gonna play the tracks. It depends — you vibe off the audience. If they’re jumping up and down for one track, you might extend it or you might wanna tease them. A Sunday night audience might be more mellow and laid-back, so you might play to that.”