A FEW WORDS FROM CLAPTONE…

“What time is it and where am I?” These are questions I find myself asking repeatedly lately. Yesterday, I flew into Toulouse after playing a string of cities including Guadalajara, Mexico City, El Paso, New York – and it occurs to me – I’m now on the train to Barcelona.

As the trolley rocks back and forth, I allow my mind to become in sync with its vibrations and can finally catch my breath and put my thoughts into words. I’ve been on the road for as long as I can think back, but the last three years have been more intense than ever, even for a wandering spirit like me.

And very soon everything is to culminate when I get to London, Berlin and Amsterdam to celebrate the release of my debut album ‘Charmer’.

“How did it come to this? How did I end up here? Who am I?” The existential, secondary set of questions I ask myself, but more frequently am asked by others. Does Claptone really exist or am I just in your mind? A mystic figure you create. A shadow you fill with life when listening and dancing to my music? I can’t answer that, but it feels real.

I’ve been raised by rhythm, melody and sound. Inspired by a global sonic environment and by all kinds of music from classic to dub reggae, from indie rock to hip-hop. Genres never mattered to me, much like the vast terrains whizzing by outside the train’s window … they come and they go. However, music has staying power, certain songs either resonate with me or don’t, and it has nothing to do with genre. ‘Charmer’ is the consummation of the inspiring and emotionally charged tracks and voices that have haunted me for a long time, since I started making music myself.

For many decades I produced my music in the dark, only for me to listen.  Releasing my compositions didn’t seem relevant for me, so I didn’t make an effort to bring them into the light. This changed dramatically when I first saw a DJ playing live to people.

I realized that the emotional feedback lifts the spirits of both the crowd and the DJ, and that’s a very positive thing.

I underestimated the power of music for too long. Music makes people happy, sad, energized, sleepy, nostalgic; it triggers emotions, which doesn’t seem like much, but in the harsh reality of capitalism, music has the power to help you find your way when you are lost. It makes people feel again.

With that in mind keeping my music to myself seemed a rather selfish move, so I started releasing to give something back, pay tribute to all these musical inspirations from The Doors to Wu-Tang Clan, from Farley ‘Jackmaster’ Funk to Nirvana.

Still I did not feel comfortable with completely stepping out from behind my thin veil of protective darkness and being there amongst artists who get addressed as superstar geniuses and put on pedestals every day.

That still doesn’t feel right to me as music is a personal but social thing whereas at the same time it’s a cultural not religious act. Miraculously, when the first rays of light hit my face I wore a golden Venetian mask.

This mask is part of my personality, one of my many faces. Being a Venetian mask, for me, hints at the rich history and culture we all share. And of course, it evokes an air of grand masquerade balls that have been tradition for centuries … social tradition, which allows us to explore our identity and to fathom our freedom as individuals in performative play.

One aspect of it is being able to question authorities and hierarchies, structures of self-sustaining power, question those we kneel down before. Gold for me reflects the treasure that I found in music. It simultaneously ridicules the greed and materialism of your average ‘rock star’ or ‘hip-hop hero’. The beak, with its birdlike shape, is giving me access to perform beyond human abilities. At the same time, it pokes fun at the hubris of ‘pop idols’ who think they are more than simple human beings. The resemblance to a plague doctor’s mask is not by accident either. You are welcome to perceive me as some kind of sonic plague doctor.

My practices are surely different from these of your general DJ/producer, as I avoid photos, especially photos with other people, and I do not give autographs. This helps me to maintain the physical distance and enables me to become even closer with you on an emotional level. Music is the central means for me to unite with you, become a true soul mate.

And here we are. Not long before the release of my debut album, which is going to help you revitalize your love for the music. At first it’s a pleasure to listen to, neither loud and overexcited nor quiet and boring, just a real ‘Charmer’. It’s not the gentleman that merely foots the dinner bill and opens certain doors for you though.

It’ll connect with you on an emotional level and touch your soul. So, sooner than you realize, you may fall under the spell of it. And then you dance to my flute like the snake of a snake charmer. But fear me not, my intentions are good and I will lead you back to music.

How to create an album like ‘Charmer’ might look like a miracle at first, but I will let you in on a secret: There’s no magic involved in the production of this album whatsoever. It’s just the result of a down-to-earth, truthful and open personal approach and the meeting of minds.

Allow me to go back to go forward. The idea of making an album came right after the success of ‘No Eyes’ with the impeccable JAW of dOP. This song was laid out as a B-side in 2013 and became bigger and bigger in the clubs though it had a full vocal on top.

This gave me the confidence to think about making an album that expands the sonic frontiers of what Claptone sounds like beyond the club world, beyond the world of EPs, which cater solely to the DJ and the dancer.

After writing some instrumentals that I felt would define the sound of Claptone, I began personally contacting people whose music I have enjoyed over the last few decades. I wrote about 100 emails and talked to the vocalists I wanted involved on concerts they were giving.

To me it was very important to get the performers I was inspired by, the singers that managed to touch me with their music over the years.

Peter, Björn & John with ‘Let’s Call It Off’ and ‘Young Folks’ of course, Jay-Jay Johanson with his first album ‘Whiskey’, ‘Watermelon’ by Nathan Nicholson’s band The Boxer Rebellion, Clap Your Hands Say Yeah with their amazing ‘Satan Said Dance’ and Jimi Tenor’s ‘Year Of The Apocalypse’ or ‘Take Me Baby’ – all the music that got me excited, made me laugh and cry.

These were the reasons for me to connect to these singers and unique performers, which are very important to the overall vibe of ‘Charmer’. I didn’t want any studio singers, I wanted characters. These artists give my music a voice. And I really mean that. When playing them my instrumental layouts I didn’t supply any guidelines as to how the lyrics should be or anything.

What they came back with from after writing was a revelation. Everything just fell into place. It instantly felt like the words fit my music, they added the emotional as well as social and at times political layer, which was needed.

Contacting the voices that spoke to my heart and have them involved in the creation of this album was the magic trick that enabled me bring you ‘Charmer’, and I can only hope you can connect and feel it too.

There’s lots of opportunities to fall under the spell of the album as there will be a whole ‘Charmer’ DJ tour in autumn thru Europe and North America. Watch out for the dates and drop by, because I have lots of surprises in store for you at these gigs. I love surprises. I love them almost as much as I love secrets.

I employ an approach to emotionally activate and challenge the crowd without losing the connection. It is that very personal interaction with the crowd that keeps me touring the world, the search for these collective intimate moments thru music. I took it all a step further with the Claptone Immortal Live show, where I am able to add a visual component.

It’s an adventure I created with Oscar-nominated director Peter Martin who has worked with artists as diverse as M.I.A., Peter Saville, Alexander McQueen and Jamie Hewlett (creator of the Gorillaz). Claptone Immortal Live was premiered on selected festivals in Europe this summer and will be taken to Australia in November and December. Next year, it’ll continue in the US and South America.

With all the travel, all the planes, trains and people, you may wonder what keeps me rooted. Music is the answer. The completion of a body of work like ‘Charmer’ gives me the energy to persevere and it is not only that I am happy with the outcome but also I am now able to clear my mind and hard drive, produce some club tracks and remixes.

In fact, after the ‘Liquid Spirit’ remix I did for Gregory Porter, the phone hasn’t stopped ringing. I feel blessed being able to remix Disclosure, Faithless, Duke Dumont or Rudimental as well as Metronomy, The Wombats or Hurts. There’s a lot of great music out there and I am grateful for being able to play it for you.

The train comes to a sudden halt; it must let some passengers off so new ones can get on. As I sit here writing my manifesto, coming from one tour and already embarking upon the next, I can assure you my journey is far from over.

Now that you have taken a deeper, personal look at the brain behind the beak, we’re sorting you out with a memorbale Halloween with the man himself. Claptone and We Are WHSE present The Masquerade We Are Halloween on 29 Great Suffolk St, Southwark, London (18+ to enter). DJ Mag is offering TWO pairs of VIP tickets, complementary drink tickets and a Claptone bag full of goodies. Trick or Treat?!

To enter please email competition@djmag.com using the subject line “Claptone Masqerade”, include in the body of the email your contact information and twitter handle. Share this article on twitter, tag @DJmag @Claptone_ and watch out for your name to be called by Wednesday 28, October. Good Luck! 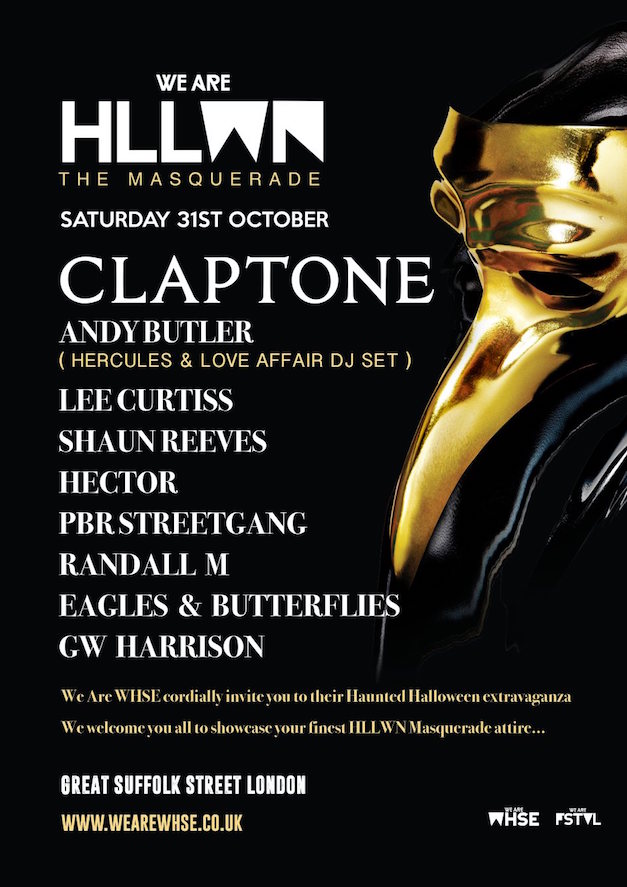